Things have been so busy this month that it is just getting silly!

At work we had the sudden news that the department was moving.  We have been in the same place for my whole 25 years at the place, and this came out of the blue.  The time frame for getting the current location cleared was very short, but somehow it was managed.  We are now in temporary offices and I will be moving again at the end of August.  So much for the quiet summer that we normally have in the academic world!

Number One Son also just graduated, as a Master of Physics with a First Class Honours Degree. 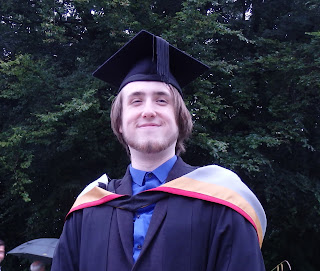 He tries to be modest, but his pride in his amazing achievement really shows in this pick...
We had been thinking that this might be our last visit to |Lancaster Uni, which is about as far a way from home as you can get and still be in England, but no!  Arnie, our youngest, is showing interest in going there himself in a year or so!

Mrs RC and I travelled up on the day and stayed over night, allowing us an evening there to have a meal and relax a bit.  This was much needed, and was almost like having a mini holiday!  Yes, things have been that busy!

Custard the Labrador is really feeling his age this year, with some leg problems really affecting him now.  He is having injections that are working well for him, so hopefully we can hang onto him for a while yet.  It all comes down to quality of life, and he is still happy at the moment.  He walks when we arrive at our destination, but he now has to ride in his cart that we have had for many years knowing that this would happen at some point. 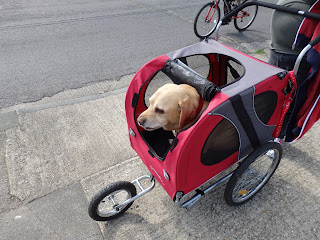 The house is going to be really full again soon.  Not only has Number One Son moved back "for ever", but one of his friends is also going to move in.  Never ones to turn our backs on someone in need, it will be a squeeze, but it will also be fun.  He is a great lad who we have kind of adopted as part of the family so he will fit right in.

I really can't believe how long it is since I posted again.  MUST TRY HARDER!

Last week, my part of England had very miserable weather, but as the weekend rolled it everything cheered up, with the sun starting to break through the clouds and the temperatures rising to something reasonable for the time of year.


This was spoiled for me on Sunday when a stomach bug arrived and kept me trotting to the loo all day.


Yesterday I was still trying to shake it off, so called in sick and spent the day trying to rest and revitalise myself.  More or less managed it, but I am still feeling a bit under the weather today.


I am now waiting to go out for my Tuesday evening of games, but a thunderstorm just rolled through and caused a bunch of sudden localised flooding around the place.  Hopefully things will have drained before I have to leave, as I will be getting very wet trying to retrieve my bike if not!


Number One Son has now finished his Masters, and is very confident of getting a good overall grade.  He is now having a short holiday with a few friends before we bring him home.  Can't wait.


Our daughter has also had good things happening, making it clear that leaving her job was a good move.  She has been accepted at the Uni that I work at, studying Criminal Psychology and Forensic Investigation.  This means that she can live at home while studying, which will save a load of money for all of us.  Mrs RC is also fascinated by the psychology part of this course so wants to read her books too!  Also, given that my Masters will be focussing on Anti-Social Behaviour, there will be a lot of crime study going on at home come the Autumn!


Hm, looks like the rain has passed, hope the drains are working...
Posted by Rock Chef at 09:03 7 comments:

Monday was a Bank Holiday over here.


Some people like to have a nice long, lazy weekend, relaxing in the early summer sun, soaking up a beer or two.


Others like to treat it as the time to do some major work on the garden, getting it ready for summer.  It is a traditional time for planting up those final flowers, digging ponds, fixing decking and arches, etc.


This makes it a busy time for A&E departments, of course.


On Saturday we moved Mr Chuffington into the front garden, which is more wild than the back garden.  The change in environment is very dramatic from him, as he used to be on a paved area with much less interesting stuff to do.  He seems to be having real fun with it, rummaging around under bushes and in the grass, and marking his territory.


So, on Sunday morning we bit the bullet and set about digging another, bigger pond for the fish.  The big fish (including Lonesome George) will move into this one while the smaller pond becomes a nursery pond if they spawn again.  Last year they had babies and we took some indoors for safety, but they gradually died.  After we lost the last four the tank was cleaned and refreshed.  We bought three more fish, which died within days.  With this final defeat, we have decided to go strictly outdoors for our fish.


The new pond quickly took shape, and on Monday we bought the liner, fitted it and filled the pond with fresh water.  We will be giving the new pond a couple of weeks to settle (and will be moving some water across from the old pond so that it gets some life in it) before we move George and Co across.


Had a moment when I thought I would be on my way to A&E.  I was loading clods of earth into a hand truck to be moved to the front garden when I took a step backwards.  Only my foot caught on something, causing me to just topple over backwards.  Luckily I landed OK, suffering nothing more than a small graze on my back and a bruise on one buttock.  Nothing a nice hot bath couldn't fix.
Posted by Rock Chef at 09:29 7 comments:

Update for anyone who is still hanging around here...

Well, the last couple of months have been busy, routine, and with a fair dollop of stress from various sources.


Number One Son has been working through to the end of his Masters, having a bit of a crisis along the way, thinking that what he was doing wasn't up to standard.  His grades are coming back and although some are below his usual (not necessarily his own fault IMO) they are still enough to get him in as top of the year.


He comes home soon, for ever apparently!  Time to sit back and see what he wants to do next!


Our daughter became disillusioned with where she was working, so is now applying to go to a local University to study Forensic Science.  This means that she can live at home while she studies, which will be both nice for us and a lot cheaper for her!  Hope she gets a place!


Our younger son, Arnie, is in the middle of his exams, and has also had a bit of a crisis, not thinking that he is being taught everything he needs to know.  A ton of self study later and he is doing OK, feeling that things are going well now.

Yes, I seem to have turned into one of those bloggers...


But I have been doing this for 10 years now and I guess there is only so much to write about.


Life has settled down for the moment, work is steady and  a little more taxing than it used to be, meaning that the breaks that I used to use to write now tend to be spent trying to escape from my PC!


So there is not much to say today.


It is foggy outside, which I like.  Not the obvious thing for a cyclist to say, I guess, but I find that it slows the cars down and generally makes the journey more enjoyable.


Mrs RC is about to reach one of those birthdays, so to celebrate we are having a family day in London.  Number One Son will be joining us from Uni too, which will make the day even more special.  We will be visiting a couple of shops that we have wanted to go to for a while, maybe a market or 2, wrapping the day up with a meal in China Town.  Looking forward to it immensely!


Oh, and I have another Star Wars tournament at the weekend.  I now have so many ships that I am at a total loss as to which ones I should use.  So many options.  I will probably go with the ones I like most rather than the ones that I think are tough - my usual approach to things, which probably explains why I am poor and happy!


Hope to see you all soon!  I will be playing blog catch up later today, I promise!
Posted by Rock Chef at 01:00 10 comments:


Over the weekend the warmish wet weather that has been with us more or less constantly since the early autumn has been replaced by clear skies, cold, crisp air, frozen puddles and ponds, and frosty grass.


Love it!  Of course, when there is ice on the road I have to be careful, checking for traffic before pulling into the middle of the road to go around it.  I know the roads very well, but don't want to get too intimate with them  :-)


Most of England also had a dose of snow at the weekend too!  It worked its way south, reaching London and the counties to the north and west of Kent, but we had nothing.


Custard loves snow, and will roll in it, making doggy angels.


Frou Frou hates it, though, as she gets it stuck to the fur around her feet and between her toes.  This does not amuse her, and means that she ends up being carried home, which is not an easy task given that she is rather heavy for a small dog and we still have 2 other dogs on leads!  If we do get some snow here I suspect that there will be 2 walks.  One for Frou Frou and Spot (who is rather attached to his bed that is next to a radiator) and one for Custard.  He likes to get out and about, regardless of the weather!
Posted by Rock Chef at 03:55 6 comments:

Wow, famous people seem to be dropping like flies this year.

Lemmy was not the greatest singer or musician, but her was the arch-type rocker...


David Bowie needs no introduction.  His massive range of styles means that there can be few people who do not like at least something of his, even if it is only The Laughing Gnome or his Christmas duet with Bing Crosby.


His songs were the background music to my teen years, and I saw him live in the 1980s during the Glass Spider tour, which was amazing.

And the today, we here about the death of Alan Rickman, one of the greatest actors ever, IMO.  From the bad guy in Die Hard to Colonel Brandon in Sense and Sensibility to his wonderful role in Galaxy Quest, he always played the part to the full, tugging at heart strings with his subtle facial expressions.  Just watch this stuff from Galaxy Guest, a dumb spoof of Star Trek that he takes to another level.